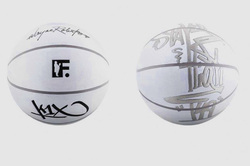 One of the popular recent sports Which has really grown dramatically since its creation is basketball. Yet, who would ever have thought that the first ever game of basketball was in fact played with a football. Yes, that is definitely true, Dr. Naismith, the founder of the game, improvised a ball for the first ever basketball game in 1891, which, as it happened, was a soccer ball.. Obviously, a long time has passed since those days and we now have got a huge selection of hi-tech balls in order to meet every need of a\requirement of a basketball player. Needless to say the balls display small similarity to the sophisticated balls we now use: In the beginning the basketball was made of leather, carefully hand stitched and containing a rubber bladder.

It wasn't until 1942, when a new design for the basketball was released. The new style was molded which made it easier to dribble, because it bounced much better. Typically the American Basketball Association put into use the customized white, red and blue ball from the middle 60's to middle seventies. However, as the sport advanced more, the leather ball equally evolved with it. Leather was always the favored material for the ball covering, before long though that started to change. By the 90s composite fabrics were beginning to surpass leather as a normal basketball material.

Similar to any widely popular game, basketball calls for precision made products of a high quality. These days, the weight, the air pressure, area, material used, coloring, as well as the bounce of the ball are carefully calculated in order to standardize the basketball ball.

The NBA for example, doesn't share the specifications for basketball manufacture that the NBA or FIBA does.FIBA has exacting demands regarding the specifications of the match ball. Before a ball is given the go ahead for use in FIBA matches it needs to pass a number of scrupulous assessments. examples of these exacting tests are: valve tests, bounce and rebound assessments and tests to determine the friction produced on contact with the court.

There has been recent innovations too, recently in 2006 by Spalding. They produced a basketball constructed from microfibre composite which was moisture controlling and meant to provide better grip. A nice idea but one that just didn't go down well with the participants who complained and requested to bring the typical leather ball back. It seems the material performed its job a tad too effectively and created chaffing along with sores on the players palms. It was not long before the NBA moved back to the original leather ball, much to the relief of the participants.